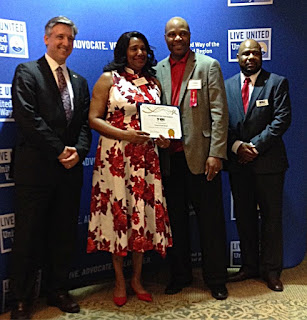 Pennsylvania, USA ----In an award ceremony held in Harrisburg on Thursday evening, April 20, 2017, Community Life Coaches, Chris and Carol Green, received one of United Way's 2017 Volunteer of the Year Nominations for their work and services in the Shalom House Women's Shelter.

“When I first met Chris and Carol and learned of the work that they do, I knew they could have a significant positive impact on the lives of the residents we serve at Shalom House, “says Executive Director of the shelter, Denise Britton.

“Without hesitation, they jumped in to begin engaging the residents and furthering the potential of turning an experience of homelessness and often hopelessness into hope and possibility. Further, they committed to helping us raise the bar of effectiveness for our staff, offering their coaching expertise (and encouragement) in regular staff training sessions. Our gratitude is unending.”

A little over one year ago, the Greens were merged into the Shelter's calendar to provide life coaching support for both the staff and residents of this special outreach situated in one of the City of Harrisburg’s high-crime neighborhoods.

"We're honored to be named among so many great people." said the nominees following the event. "We learned of many others who are donating hundreds of hours per year to worthy causes in the community. It's humbling to be mentioned among them."

Chris and Carol Green became part of the Shelter’s strategy to transition the residents out the shelter and back into everyday life. Their coaching tools proved to be vital in enhancing the resident’s life coping skills; enabling them to take confident steps toward rebuilding their families and recapturing their lives.

Chris and Carol Green are certified master life coaches, urban family advocates, marriage and family advisers, and community leadership consultants. This couple created and implemented a proven coaching model that empowers people to push past the temptations to give up, and instead, make intentional, thoughtful and positive responses in spite of the devastation and obstacles in life.

For their community service, they received a United Way 2017 Volunteer of the Year Nomination. They received Urban Leadership Awards (2016) and Community Ambassador Awards (2015) from iChange Nations™ and were appointed Goodwill Ambassadors of World Peace, as part of an interfaith peace-building initiative to the United Nations, by Golden Rule International.

Chris Green is a social media veteran and an award-winning  producer of a local cable TV broadcast (1999).  Together, they are international columnists/ writers with the Global Journalism Award-winning team of Dr. Clyde Rivers and iChange Nations Social Media News™.  They are the authors of 14 inspirational and life-building books, creators and principal writers of several blogs and eNewsletters.  They are also accomplished songwriters, having penned and produced over 150 songs since 1992.

They are both licensed and ordained ministers with honorary doctorate degrees in Christian Leadership (Chris) and in Humanities (Carol), conferred upon them in acknowledgment of 11+ years of building and implementing a new urban outreach model that combined Participatory Teaching methods with evidence-based principles of Life Coaching, to produce an effective, quantifiably successful, and family-impacting ministry in south central Pennsylvania.

They are currently based in south central Pennsylvania where they established a community outreach that focuses on hearts and households, along with several life coaching and community spiritual care initiatives through their non-profit organization, Fruitful Life Network, Inc.