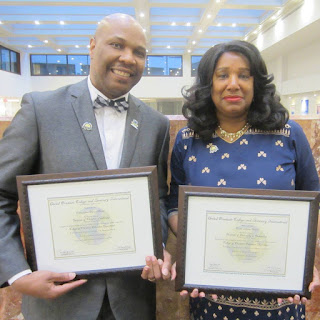 Capitol Hill, Washington, DC ---Chris and Carol Green were publicly confirmed and acknowledged for their innovative community service with Honorary Doctorates in Christian Leadership (Chris) and Humanities (Carol). The distinctions were officially conferred upon them back on February 1, 2016, by the Chief Chancellor of the United Graduate College and Seminary International (UGCSI).

iChange Nations™ recognizes Distinguished Leaders and those who are already part of their International Alumni who are effectively changing their community and nations through their efforts.

This is a recognized Honorary Ministry Degree that was conferred in acknowledgment of 11+ years of building and implementing a new life coaching model that embraces the Best Practice principles of Participatory Teaching methods and Group Life Coaching, to produce an effective, quantifiably successful, and community-impacting outreach in south central Pennsylvania.

The Greens ventured out into the human service field in a transition that began by working on a Master Certification for Coaching and expanding their work beyond the walls of the local church. Their practicum work, for earning their certification, included 60 hours of coaching individuals, but they immediately went well beyond that by taking their coaching into an unemployment center and a women's shelter. This led to open doors for them to speak in local churches and organizations, including their home city of St. Louis, MO.

In 2002, the Greens started a business called C and C Connections, LLC, which they revived to encompass their life coaching work.

Now plans are on the table to launch a focused leadership initiative that will train and certify others in life coaching and equip them to go into and help various established community outreaches that are already working with under-served populations.

"We are honored by this acknowledgement and we appreciate the kind words that are spoken about us," says the now publicly confirmed honorees, Chris and Carol Green, "It is another key that we have been given to unlock doors that had been previously closed to us. Now we can go further in our mission to transform the lives of people."

As the world's leading producers of CARE-Ready™ Coaches, Chris and Carol Green teach and train community, government and education leaders, human service organizers, business visionaries, and neighborhood dreamers how to be much more effective by embracing the principles of CARE (Compassionate Accountability with Respect and Empathy) in their professional and personal lives. They LISTEN to people, LIFT people and LAUNCH people. Then they equip and empower them to do the same for others.

Many coaching, mentoring and community outreach programs employ what is known as a "deficit model" of working with people. That's where you focus on the problems (deficits) of a person, and then apply a set of pre-determined, cookie cutter steps and treatments to address their issues. The deficit-based model is what many well-meaning Helpers use, but it rarely works long-term, leaving Helpers wondering why their clients fail to break the cycles of addiction and recidivism.

However, CARE-Ready™ Coaching mirrors the principles found in the proven, Best Practice strategies of Strength-based, Solution-focused models. CARE-Ready coaches are trained to connect with people in order to build a relationship/ partnership that empowers the client; thus allowing the client to discover the solutions that will work best for them.

Also, while many coaching programs focus on how to target potential high-paying affluent clients, and high-paying speaking opportunities, the Greens train, equip and empower Care-Ready™ Responders and Coaches, who are willing to take on the most often overlooked people of society; those who live in under-served communities, who can least afford, but benefit the most from professional guidance.

If you want to be trained and empowered to coach or mentor with a purpose that's greater than yourself, EXPLORE THAT POSSIBILITY at https://www.candcconnections.com/life-coach-certification